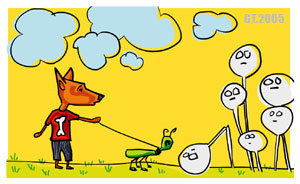 Another Illustration Friday image, these characters originated from my sketchbook.

The original sketchbook character designs were drawn in pen and I am still trying to figure out the best way to create digital line work that I like and that has that pen quality — perhaps it isn’t possible. Anyway, I gave Freehand a go this time and started the image off with Freehand’s variable stroke pen. From there I took the line work into Illustrator and added areas of color with the pen tool and then finally copied the image over to Photoshop where I tweaked the colours and added the swath of yellow. The colours are bolder than I would typically use, but I wanted to try a different palette.

Have a good weekend.